It happens all too often. Everyday millions of defenseless pairs of sneakers are destroyed by vengeful ex-girlfriends. It’s become an epidemic. Too many times these innocent, leather bystanders are made to pay the ultimate price for the “perceived” sins of their owners. How do we stop it? Good question. But before we find a remedy we must first diagnose what it is we sneakerheads are facing. See there are certain things that’ll bring even the strongest of men down to their knees. Like an unprovoked hit to the crotch. Playfully wrestling with your children and getting hit in the crotch. Stepping on a rake and getting smacked in the crotch. Having an object accidentally thrown or hurled in the direction of your crotch at a high rate of speed. A hit to the crotch that you didn’t see coming. A hit to the crotch that you saw coming but had no chance of stopping (honestly, seeing it coming might just be worse than not seeing it coming). Anyway, you get the point. We’ve established the ways to bring a man down and it pretty much comes down to one way, and that’s being struck in the crotch. Or is it? There seems to be yet another way to bring a man down; his sneakers.

Let me tell you of a friend of mine. For the sake of this article let’s name her Mary. Mary was dating a guy. For how long? No one knows and no one cares. But one day they break up. The circumstances as to why they broke up are unknown and still uncared for, but what Mary did next was not only unforgivable but I’m sure is illegal in 11 states and at least one U.S. province. She went after his sneakers. Why? What did they ever do to her? The only thing the sneakers were guilty of was being owned by a guy who had a girlfriend with a horrible temper. Why destroy works of art? (albeit cheaply made, mass produced art manufactured in China but still…..). Could you imagine if Leonardo Da Vinci’s girlfriend caught him sending scroll messages or smoke signals to another girl and got mad and cut up the “Mona Lisa”? It sounds ridiculous right? But yet Mary had no problem going after her boyfriend’s “Mona Lisa’s”. You know why? Because now a days sneakers have become man’s figurative “balls”. Going after ones kicks is the new way to figuratively kick someone in the crotch. She knew that the best way to bring her ex-boyfriend down to his knees was to get all “Wolverine” his sneakers. Doesn’t matter what he did, leave the kicks out of it. 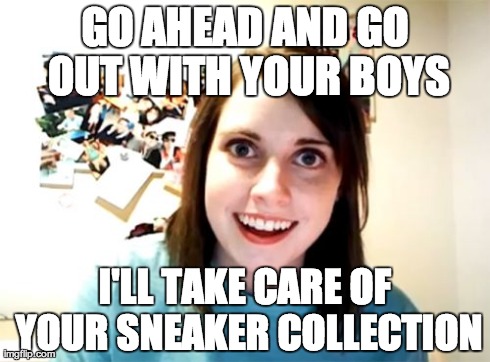 Now like I said before there are two types of sneakerhead girlfriends. One, you have the bitter and vengeful girlfriend or ex-girlfriend who all of a sudden becomes Joe Pesci from the movie “Casino” when you do something that angers her. As soon as her blood boils to a certain temperature her vision becomes red like the terminator and she locks in on your sneakers. Starting with your favorites and working her way through your collection. Many times though when she cools off and realizes she overreacted she also becomes very apologetic and looks to make amends, which usually winds up with her buying you nicer kicks to replace the ones she’s destroyed. But don’t get comfortable. Her momentary remorsefulness is temporary. Get on her bad side again and she’ll go after the very shoes she just bought you that were to make up for the last time she destroyed your sneakers.

Dealing with that type of girlfriend is a vicious cycle which is why they almost always end with you two splitting up. That’s when she’s at her scariest. She wants to leave you feeling like you got kicked in the balls. What better way to do that than to go after your kicks. But destroying them isn’t enough to go out on. No. She wants to leave an indelible image in your memory, like piling up all of your shoes in the bathtub and dousing them with bleach. Leaving them there as a sick tribute to your failed relationship. Enjoying the moment as she imagines you walking in unaware of what she’s done and stumbling across her twisted masterpiece in shocked agony. 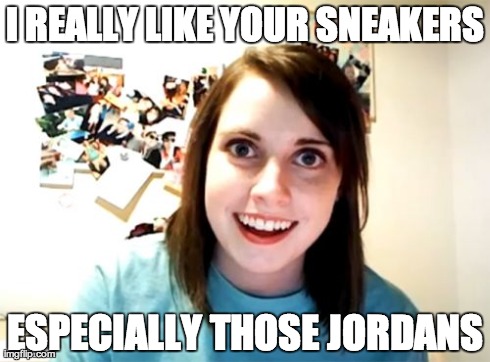 The second type of girlfriend doesn’t “actually” do anything to her boyfriend’s sneakers. She has him living under the constant subliminal threat of her giving his sneakers a haircut if he ever slips up. She mentally tortures him. Every time they get into a heated argument she glances down at his shoes with a diabolical look in her eye (it’s the same look the Grinch had when he thought of his plan to rob Who-ville of their Christmas gifts). Without ever saying it he somehow knows what she’s thinking. She telekinetically sends him a message but says it in a way a mob hitman would say it. Her exact thought is “It would be a shame if some unfortunate accident should befall your precious sneakers. You’re a busy man, you can’t always be around to protect them. Accidents happen all the time.” It’s enough to scare you straight for the moment but over time you realize that shes never actually followed through with her threats. You call yourself calling her bluff but that’s when shes at her most dangerous to your sneakers. You’ve backed her into a corner. Now she has to save face, otherwise her intimidation tactics will become useless. So willingly or reluctantly she follows through on her threats. She doesn’t channel her inner “Wolverine” like the first girlfriend. She doesn’t find pleasure in destroying your sneakers, she just wants the mental edge over you. So she does only enough damage to get her point across. Still, no matter how soft the blow is, a kick to the balls is still a kick to the balls. No man alive looks forward to having it happen to them.

Ok so how do we remedy this problem? Easy, find you a girl who’s a sneakerhead herself. That way it hurts her as much as it would hurt you if she even thought about hurting your sneakers. If you can’t find yourself a lady sneakerhead then find a lady who may not be into sneakers but understands their significance. No matter how upset she gets at you she knows that going after your sneakers is like tampering with a nuclear warhead on a submarine (or really anywhere for that matter. IT’S A NUCLEAR WARHEAD).

But fellas lets also do our part. Let’s make them feel like they’re the most important thing in our lives. Let’s keep them from feeling like they play second fiddle to our sneakers and gym shoes. Let’s show them they’re worth more than any Air Jordan, LeBron, KD, Kobe, and Penny combined. Let’s make them feel like they warrant the same amount of attention that we give to our sneakers. Yeah I know that it’s not exactly true but let’s at least “act” like it is. Lol. As long as she doesn’t read this article she’ll never know where she honestly ranks in your life between your “Space Jam” Air Jordan 11 and your Nike LeBron 11 Elite SE. Of course she’s a valuable part of your life but did you see how much those Nike Air Yeezy 2 “Red October” are going for on eBay? Lol, I’m kidding ladies. You know I love you. We need you as much as we need an inside hook up on the hottest releases. You’re as important as knowing the release date of my favorite shoe. You’re as beautiful as every Air Jordan 11 ever. Just please stay away from our shoes when we make you mad.